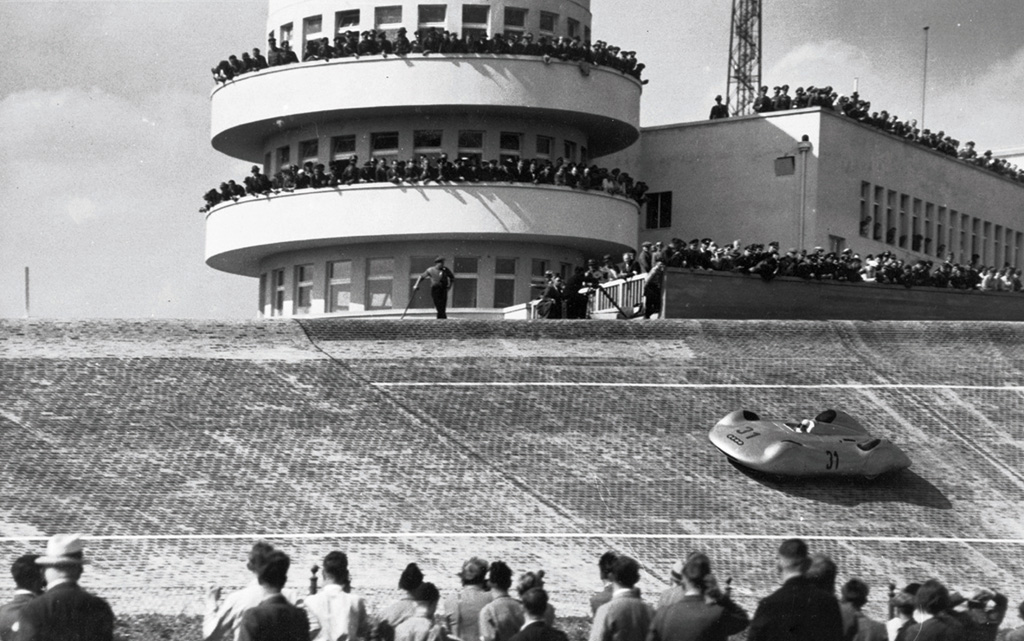 Born in Germany and raised anywhere but…

AVUS is a mythical place at the gates of Berlin’s city. Inaugurated in 1921, its name stands for Automobil-Verkehrs-und Übungs-Straße (an acronym that can be translated as « Automobile Traffic and Testing Road »).

At the beginning of the 20th century, the German capital still only ran on horses and carriages, unlike London or Paris, which very quickly welcomed the automobile. One of the reasons for this delay was that Emperor Wilhelm II, the last German emperor, didn’t see its development as a priority. Despite several groundbreaking automotive innovations emerging from German brains, his focus was set on the expansion of the Navy, in connection with his aggressive foreign policy and the rise of nationalisms in Europe.

This late start was also felt in the field of motor racing. English and French automotive federations had already established a strong position. Organizing the first automobile race in 1894 from Paris to Rouen, along with the first editions of the Bennett Trophy. France was also the cradle of the Grand Prix, whose inaugural edition, initiated by the Auto Club de France, took place in Le Mans in 1906.

Change came from Wilhelm II’s brother, Prinz Heinrich-Fahrt. He saw in the car a way to improve and promote the German industry on the international scene. One senses a nationalism of competition. Remember that we were shortly before the First World War. There, it was about a long-distance fight of the European powers on the track. After the holding of the Kaiserpreis, a road race near Frankfurt, it was finally decided to create a track at the gates of Berlin.

AVUS was a double asphalt road running through the Berlin’s Grunewald forest, in the western suburbs of the capital. Two straight lines of 10km each, separated by an embankment. Before hosting various competitions, it was intended to be a toll test track for manufacturers. Forbidden to horses and pedestrians, this road was the first one exclusively reserved for motorized mobility. Many will see here the origin of the highway as we know it today. Anyone was able to take the route to try out their car, paying the sum of 10 marks, an excessive amount for the time.

The inauguration took place on September 24 and 25, 1921, with the holding of various races. No incident to deplore in spite of the surface considered too thin by the pilots, teams and officials. One will retain the victory of Fritz von Opel for one of them, reaching the speed of 185 kph all the same. The public was very enthusiastic. However, the good dynamics were broken by the inflation due to the post WWI. The population was going through difficult times, the car no longer had the popularity that was beginning to be observed. On the other hand, the motorcycle, considered at that time as the poor man’s car, was experiencing a certain craze. To the point of being at the center of races, almost the only ones of the AVUS in the following years.

In the middle of the 1920s, Germany had modernized and was finally emerging from its slump. It was living its golden age, thanks to its cultural and technological innovations. More than 200 companies dedicated to the automobile were created in Berlin. The return of a major race in a radiant country was not long in coming. On July 11, 1926, the first German GP was held. The AVUS came back to life for a short time. Everything was going well for the organizers until a heavy rainstorm broke out and caused several accidents due to the pavement. Two deaths and several injuries were to be counted. The public lived the adrenaline, but the media and the public opinion did not follow. It was then decided to hold the next GP in another future high place of the competition not far from Nürburg. The famous Nürburgring.

The circuit knew a period of activity without prestige but during which historical events were to be noted, as the arrival of the first world tour in car (1927-1929) by Clärenore Stinnes*, daughter of the industrialist and politician Hugo Stinnes who served as a patron to the finalization of the track after the WWI.

4 months later, on Thursday October 24, 1929, the famous Black Thursday happened. On the New York Stock Exchange, a crash occurred and the world fell into the Great Depression. Germany plunged harder than the rest of Europe. The local car industry closed its doors. It leaved the field open to competitors from neighboring countries, less affected by the crisis.

Bugatti was born in 1909, but in just over 15 years dominated international racing for a good decade (1924 to 1934). One of their most important victories occurred at the AVUS Rennen III (a race that also involved a fatal accident), on the Berlin’s track on May 21, 1933. That is to say, 5 months after Adolf Hitler’s accession to power and the various events that enabled him to bring Germany to heel. This crushing victory of the French enemy was seen as a humiliation by the Nazi authorities, some of whose members were present in the stands.

The chancellor wanted to promote the German automobile and launched a huge financial support from the government. The car races were used here as a political message and its drivers as heroes of the people. This whole enterprise saw Auto Union and Mercedes dominate the international scene the following year, and the AVUS Berlin’s competitions in 1935.

The circuit takes the shape that will make it famous in 1937. It was built a banking at the northern bend of the loop with a record inclination of 43.6° and 184m diagonal. Making the fastest circuit in the world even faster. The idea was to increase the top speeds, the overtaking and thus to mark the spirits. That was a successful maneuver, as Hermann Lang (on Mercedes-Benz) won the GP of the AVUS in May of the same year. Reaching speeds of 400 kph thanks to the aerodynamic bodywork. He and 3 other compatriots following him in the final ranking delighted the 380 000 spectators. Among them, the propaganda minister Joseph Goebbels.

« [The drivers] had to go into that corner expecting the worst: the tire flying off. »

But the danger has never been so great. The staggering speeds reached highlighted the instability of the cars. The new banking of the northern curve** was made of bricks, without protective barriers at the highest point. It also caused an increase in the weight of the vehicle on the tires, and therefore of bursting. The risk of slipping in case of rain and of taking off was present at each passage. 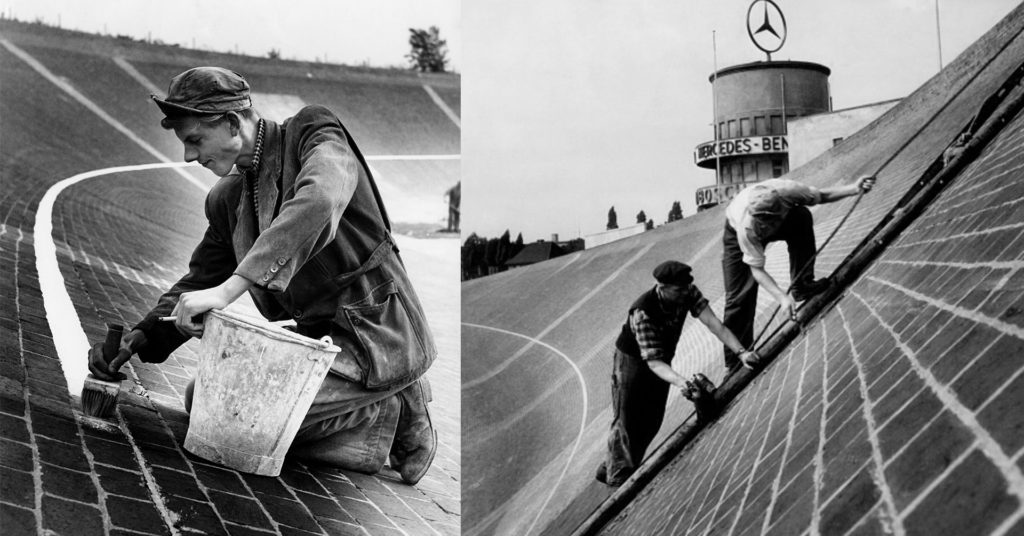 Left: 1937 – A white line served as orientation for the drivers on the steep curve (photo: Ullstein Bild). Right: 1937 – A ladder was essential to access the top of the banking (photo: Getty Images).

Planes on the ground, cars taking off

With WWII, the circuit is deserted. The defeat pushed the inhabitants of the city to the exodus, using the double track. It will be only in 1951 that the organizers gave a new beauty to the enclosure, with some difficulties due to years of blockade. No longer a political issue, the AVUS became a real entertainment event in Berlin’s aera. 330,000 spectators were present, but no manufacturer. Motor sport brought a part of the population closer to other European populations, through its drivers. Hans Hermann, Wolfgang Von Trips, and many others. All participated in this « relaxation ». Competitors but friends.

This sport was the most dangerous in the world at the time. Hermann said he saw 60 drivers die during his career. 1959 marked the return of the German GP at the AVUS***, under the rain. A feeling of déjà vu. Where a race in Indianapolis was stopped by the same weather conditions (circuit also made of bricks), the start of the race of Saturday here is given. Carel Godin de Beaufort took off in the north turn but miraculously escaped unscathed. Unfortunately, as the race was not stopped yet, Jean Behra made the same exit but hit the base of an anti-aircraft gun placed there during the war, and died. One year after winning and breaking the track speed record.

The party turned into a tragedy. Porsche gave up racing the next day for the Formula 1 GP. Hans Hermann crashed during this race, as he lost his brakes, but narrowly escaped death by being ejected from the cockpit. All these accidents caused an outcry, the track was abandoned and then connected to the A115 freeway and its banking destroyed.

Now a highway between West and East Germany, it was the only road in Berlin without a speed limit. Drivers from the West who had driven through the East German countryside felt a sense of relief once they had passed Checkpoint Bravo. From then on, with the gas pedal on the floor, the feeling of newfound freedom was total. However, effective end of the eighties, the Berlin Senate enacted a 100 km/h speed limit citing environmental concerns. This measure obviously divided Berliners. The petrolheads demonstrated and marched « for these last bits of freedom ». Up to 18,000 people took part in these rallies with their vehicles, some from clubs.

When the Wall fell, everything changed for Germany, Berlin’s life and the AVUS. Some competitions came back, especially with the popularity of the DTM (Deutsche Tourenwagen Meisterschaft) competing with F1 at the time. One of the most memorable periods before the circuit’s activities came to a final halt in 1995. The cause? An umpteenth accident, at the start of the race transformed into a pile-up with the death of the Englishman Keith O’Dor. The same criticisms came back, and this time the pilots follow. The track is blamed for not being adapted to modern cars.

From 1999, Berlin’s AVUS became again and will remain a simple highway, but still in the head of the inhabitants and the nostalgics who fight so that the circuit does not fall into the lapse of memory. It is a myth dear to the Berliners who are more than 100,000 every day to use it to enter or leave Berlin. 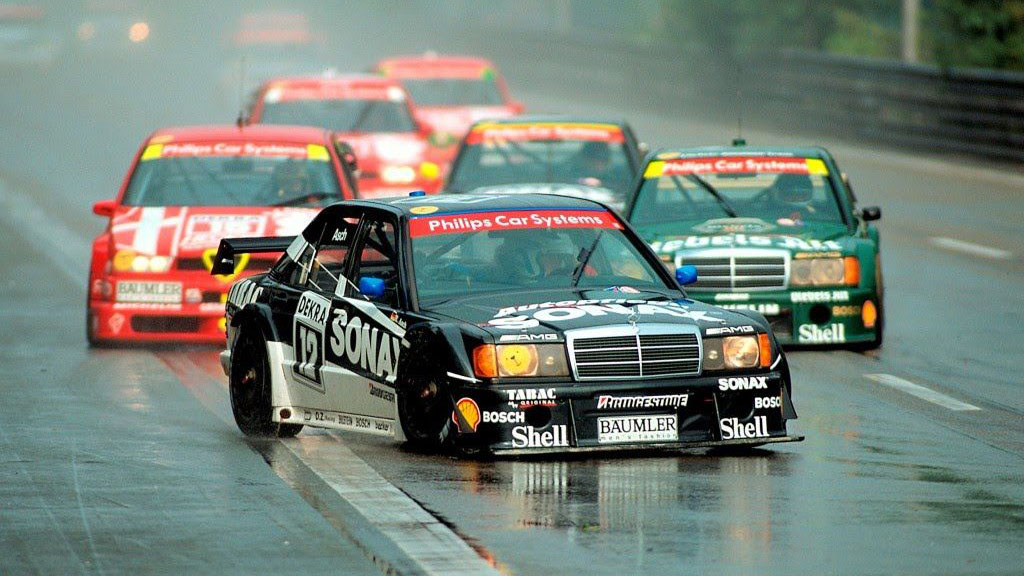 * Clärenore Stinnes is a figure of the automobile and of Germany at the same time. She is the symbol of the end of the 20’s, the beginning of modern mobility, of changing lifestyles, of wanting to travel the world. She was the first person to complete a world tour by car, which started in 1927 and ended on the Berlin’s AVUS track on June 24, 1929.

** A project of 2nd banking in the south bend is envisaged, but WWII breaks out, stopping its implementation

***For the first time since the creation of the GDR and the FRG, the inhabitants of East Berlin are allowed to come and see the GP, located in the West! 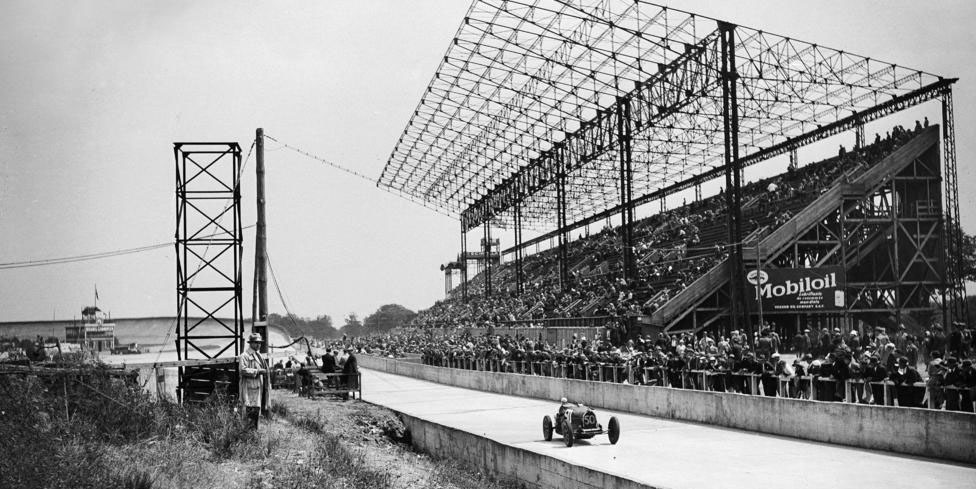