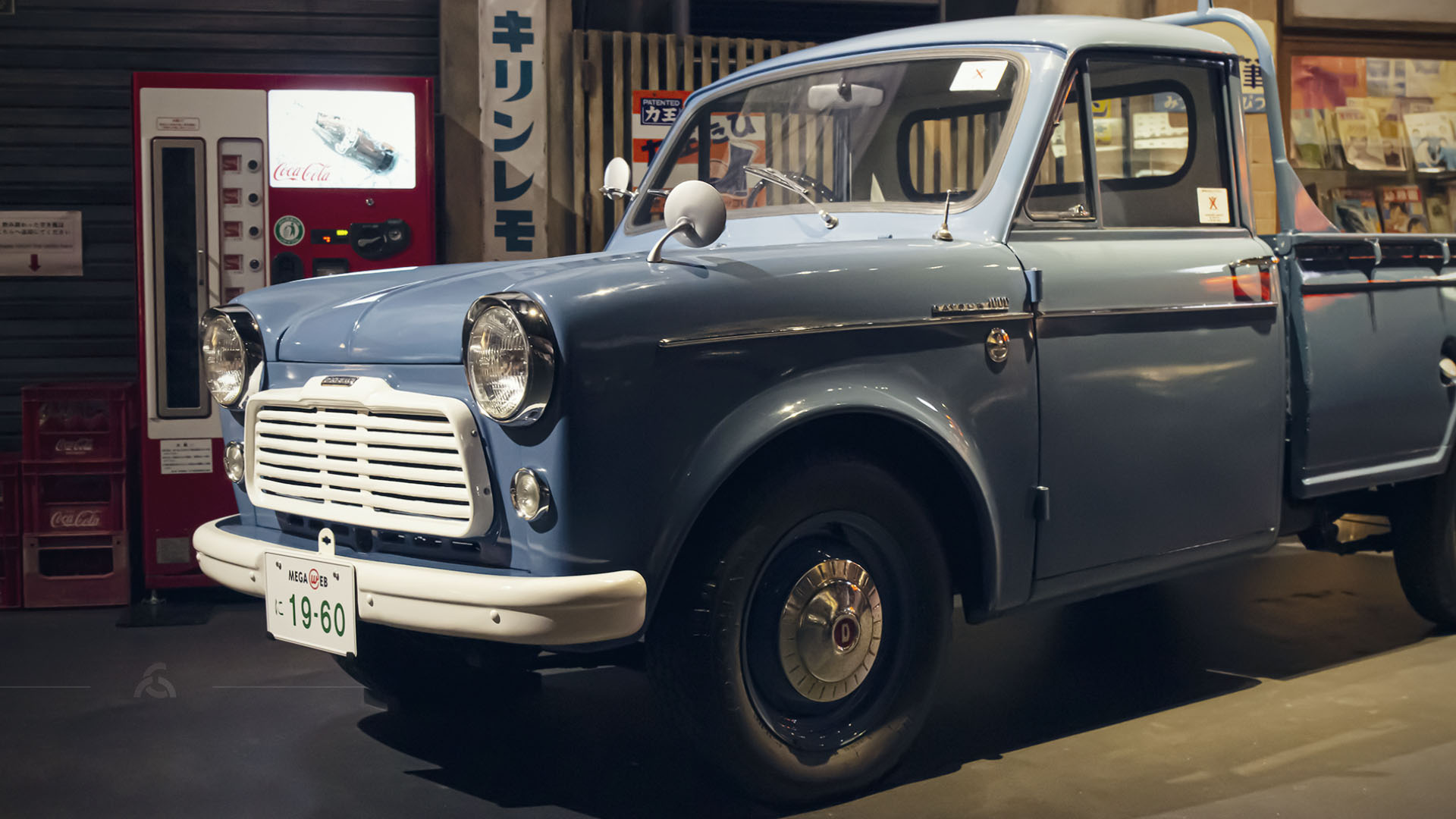 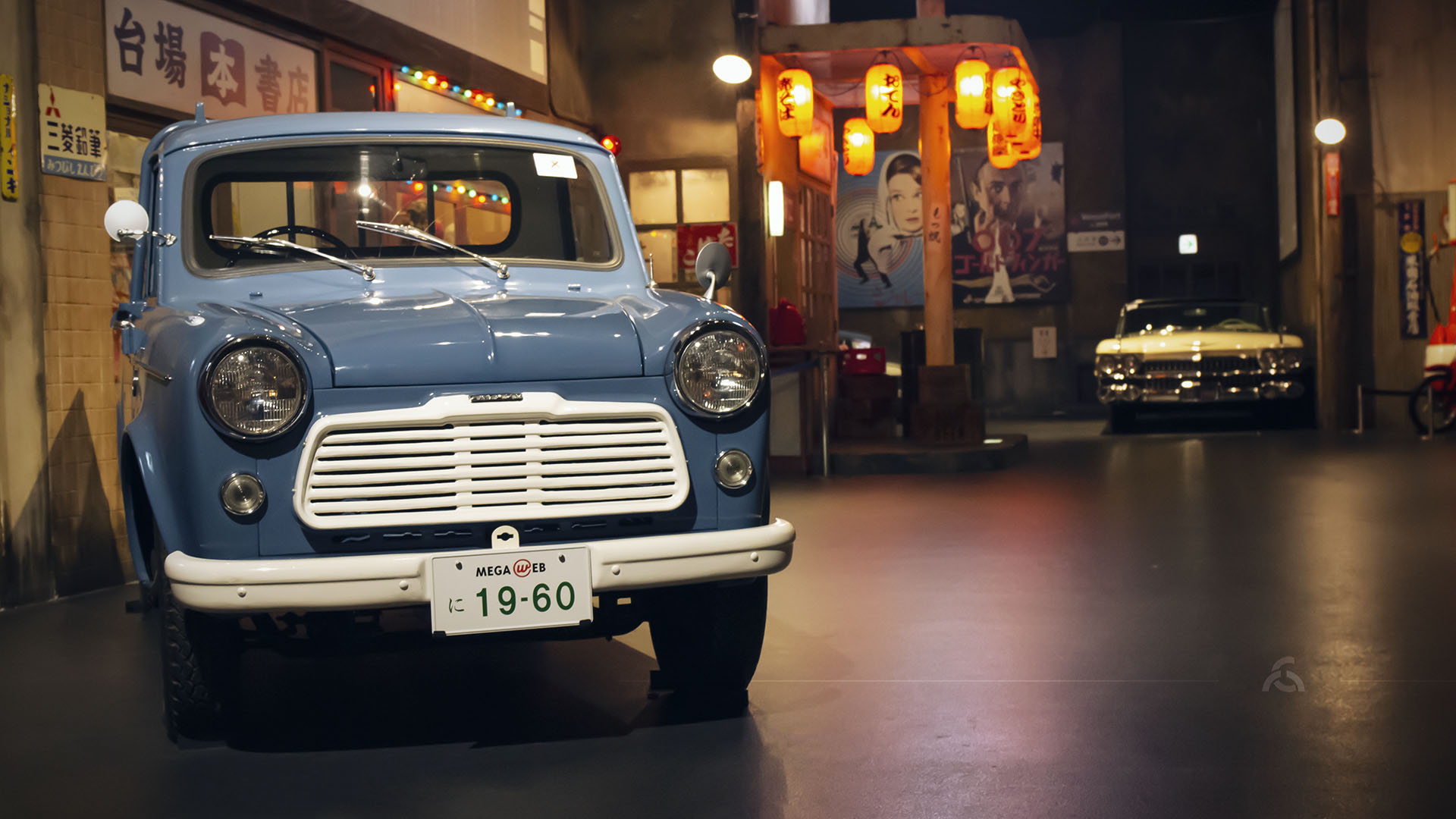 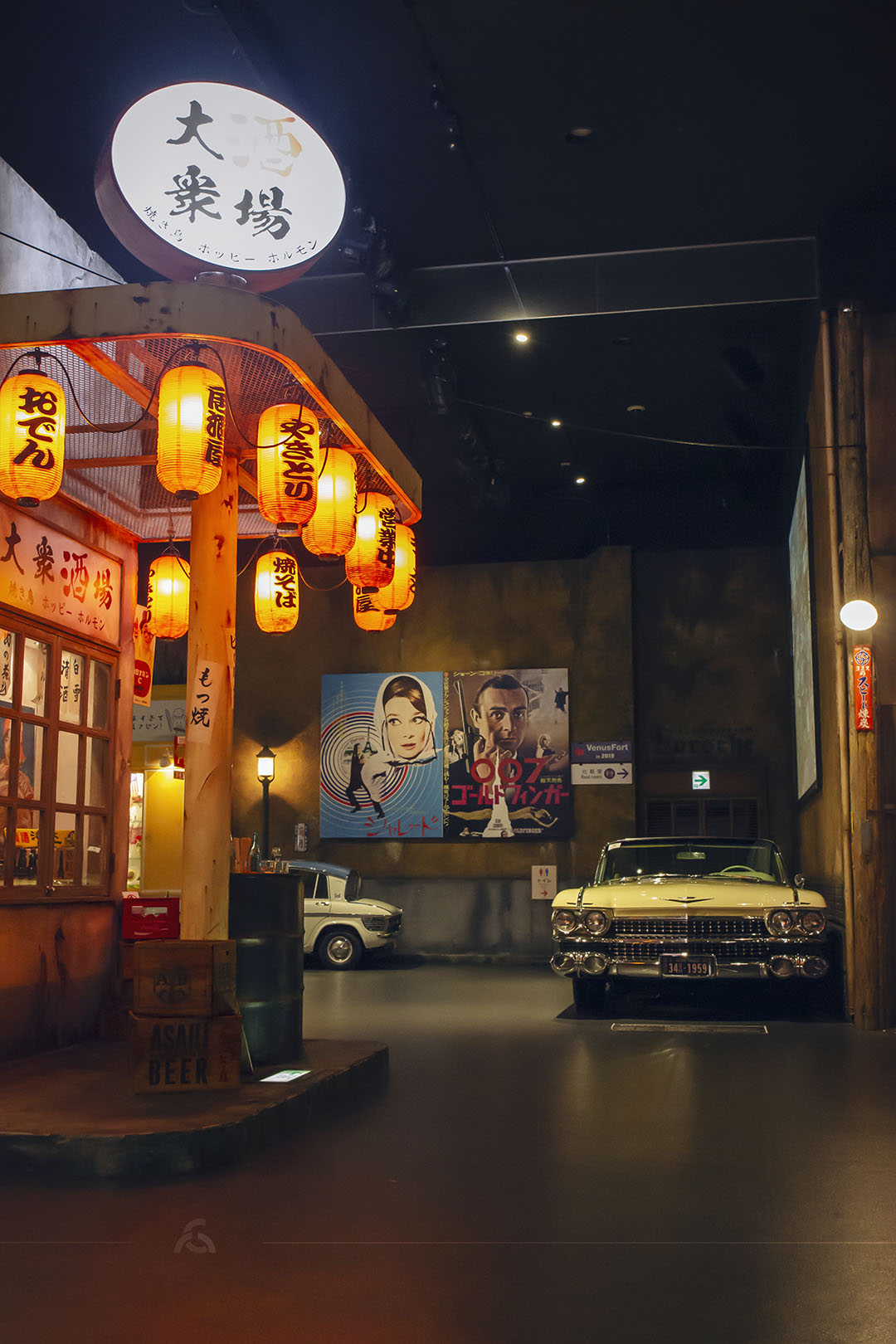 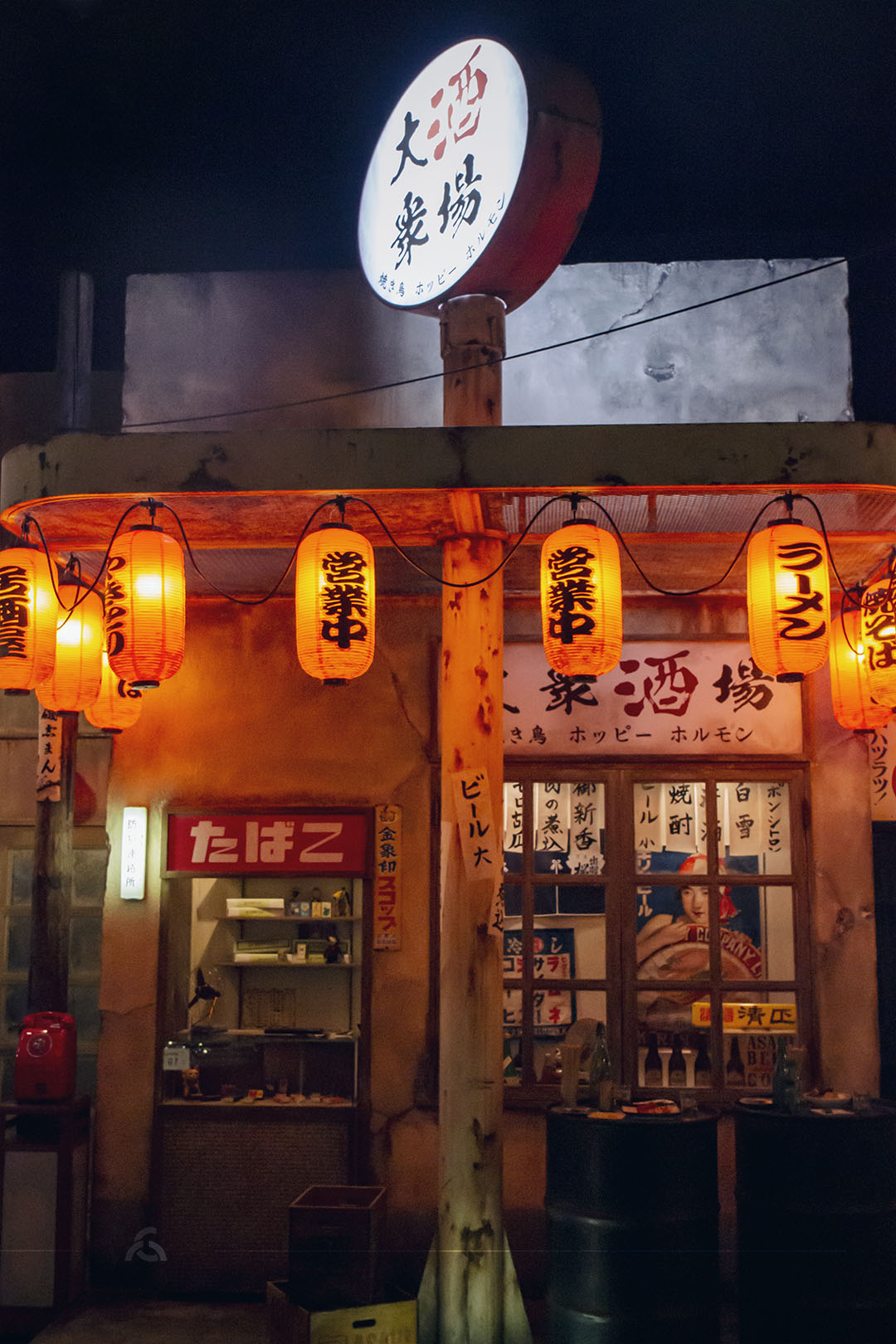 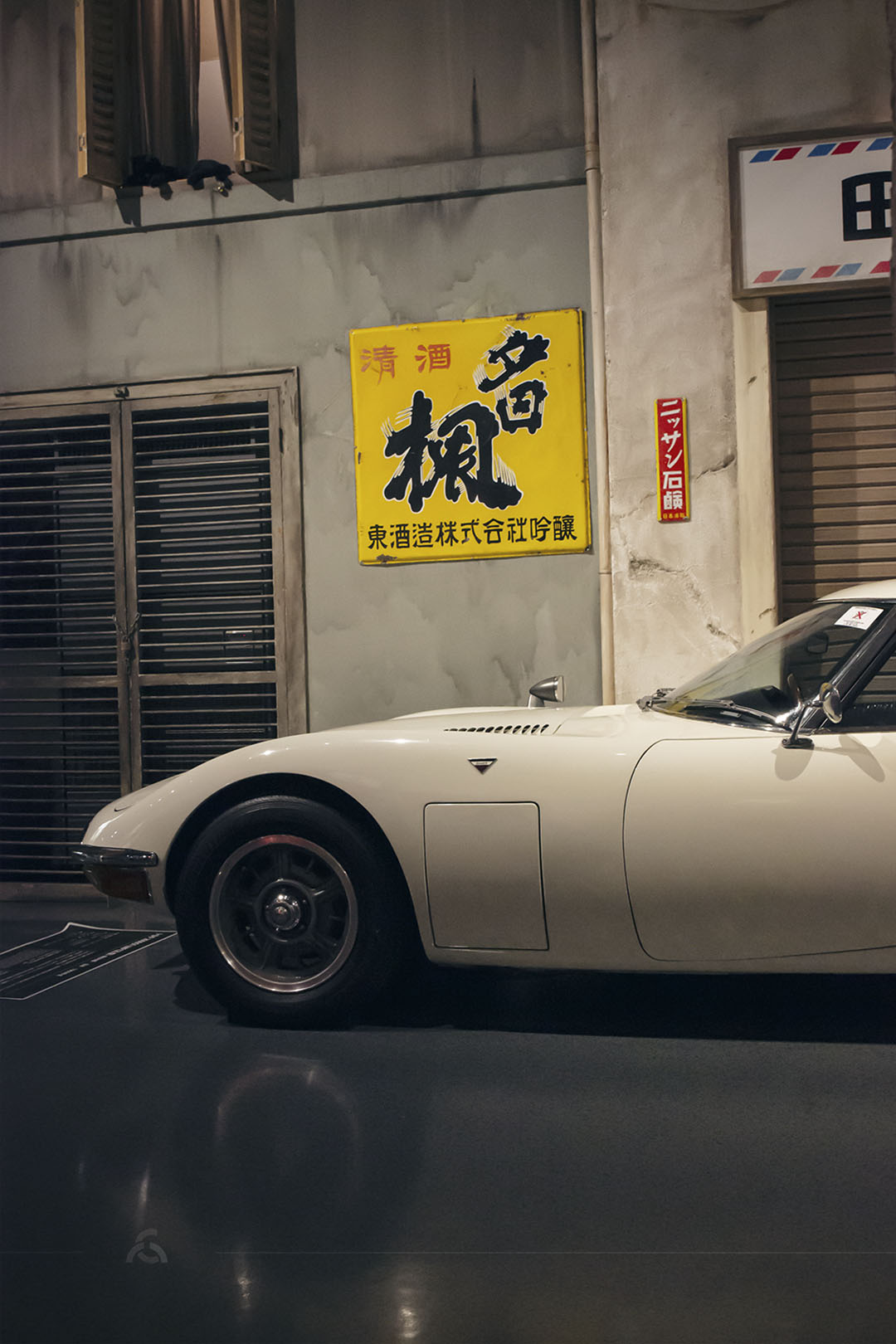 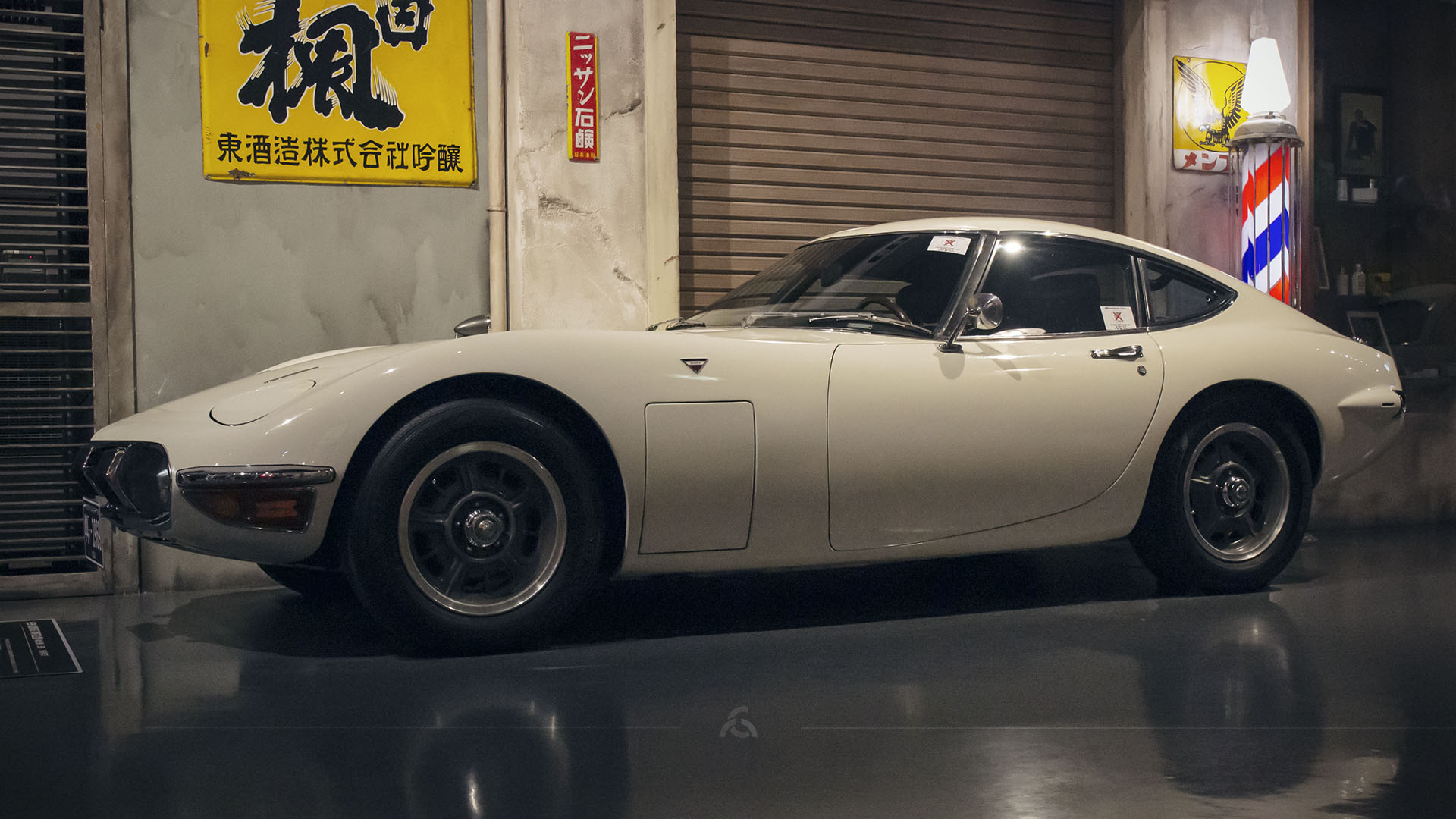 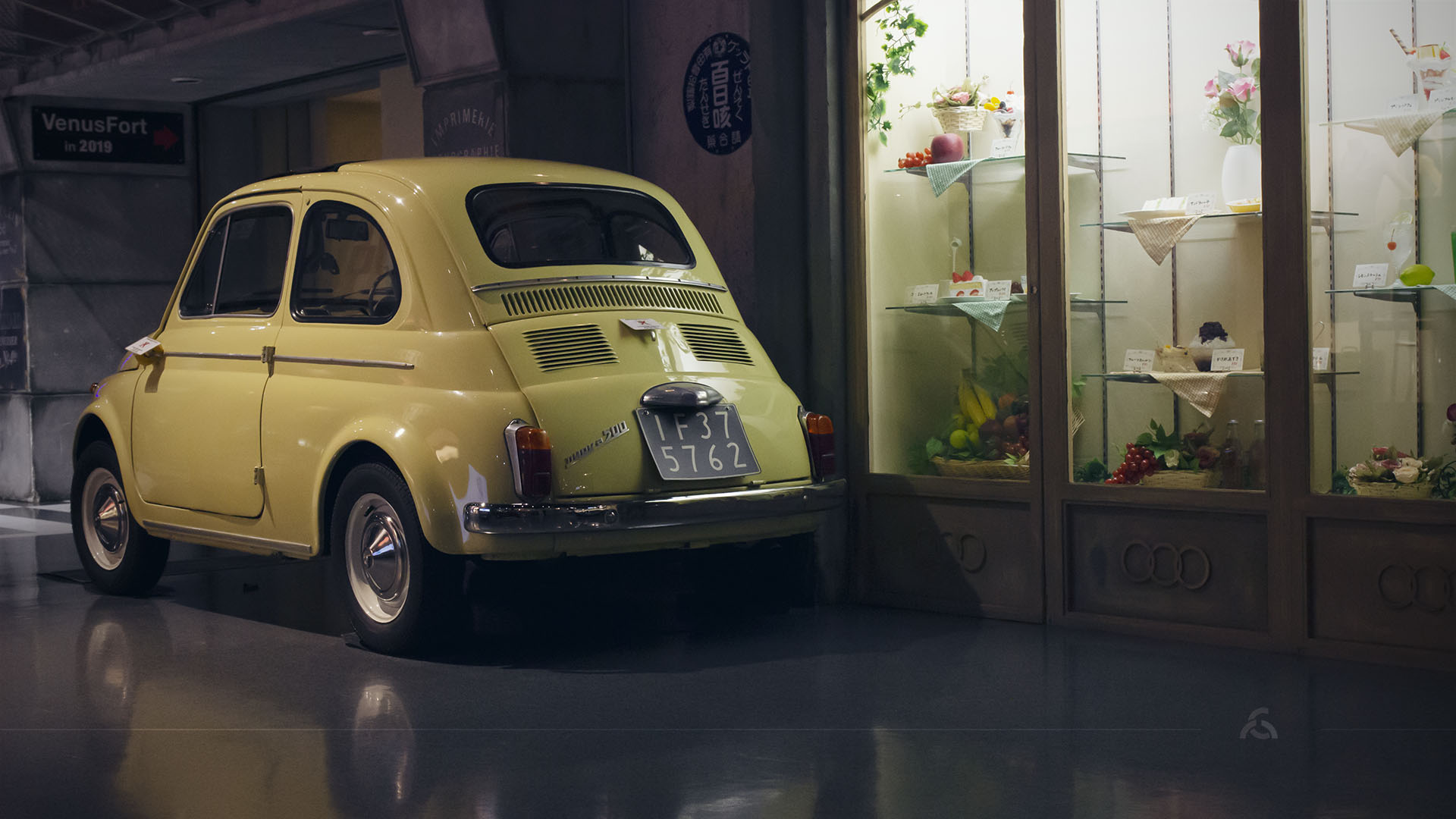 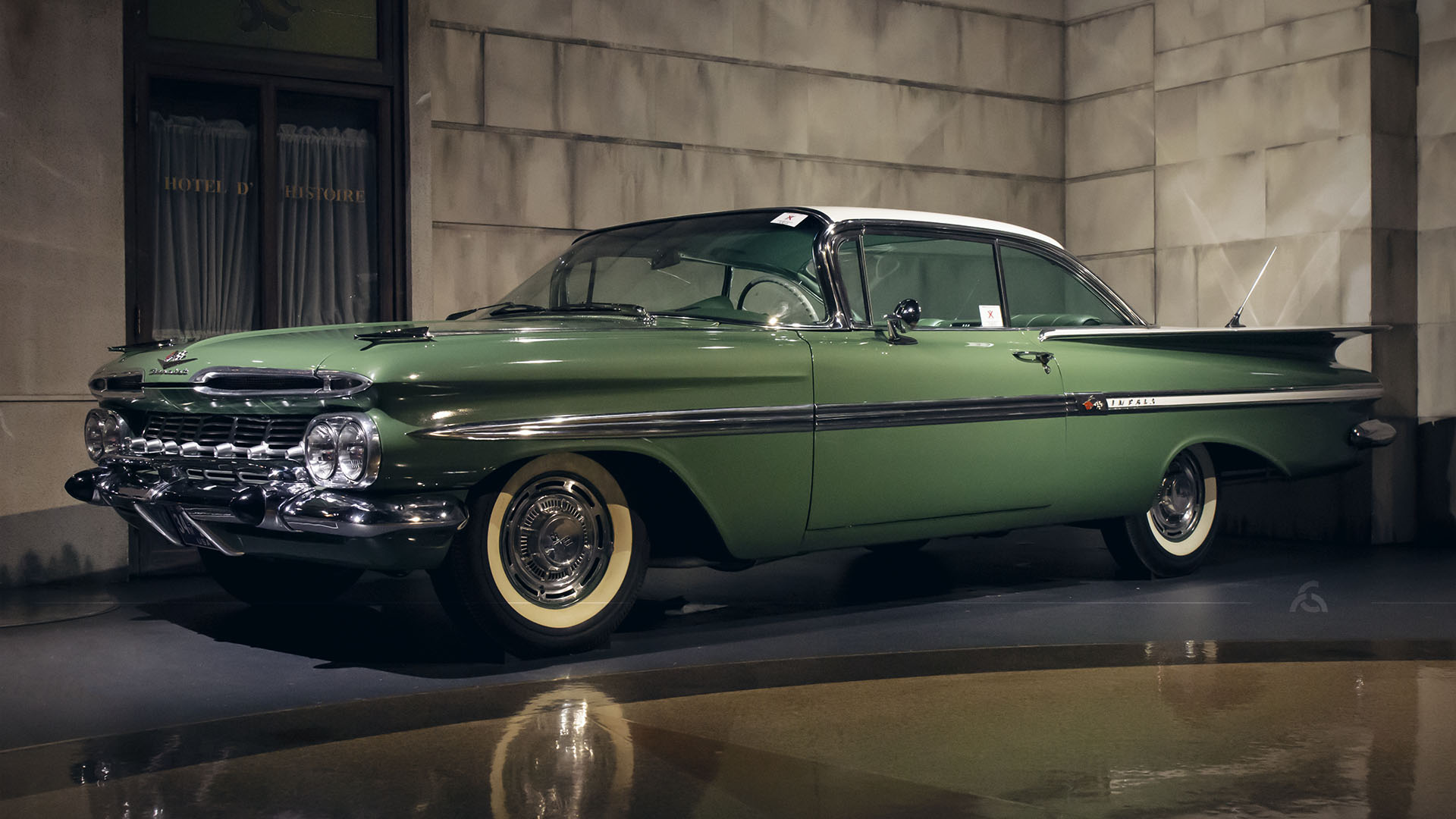 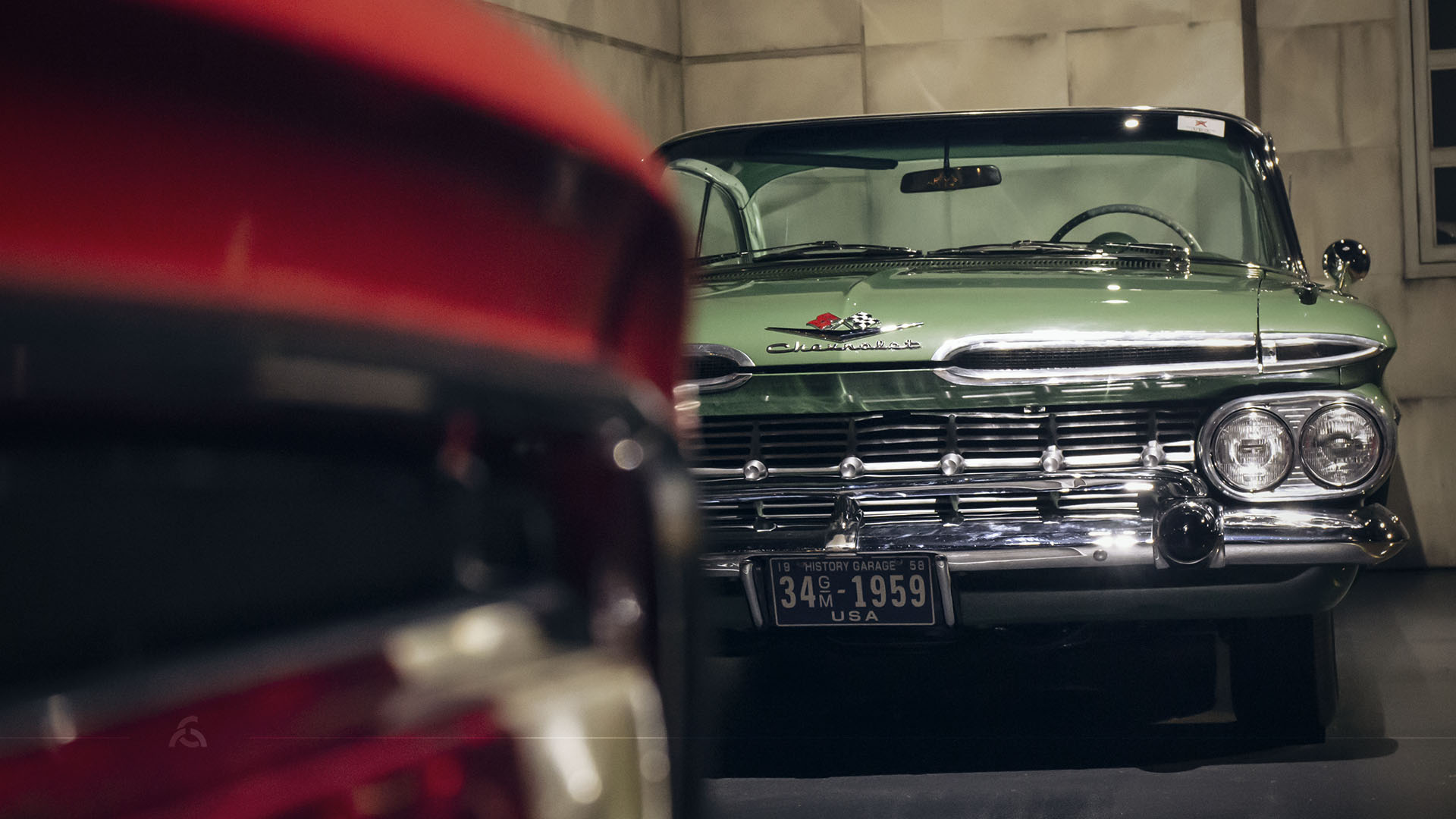 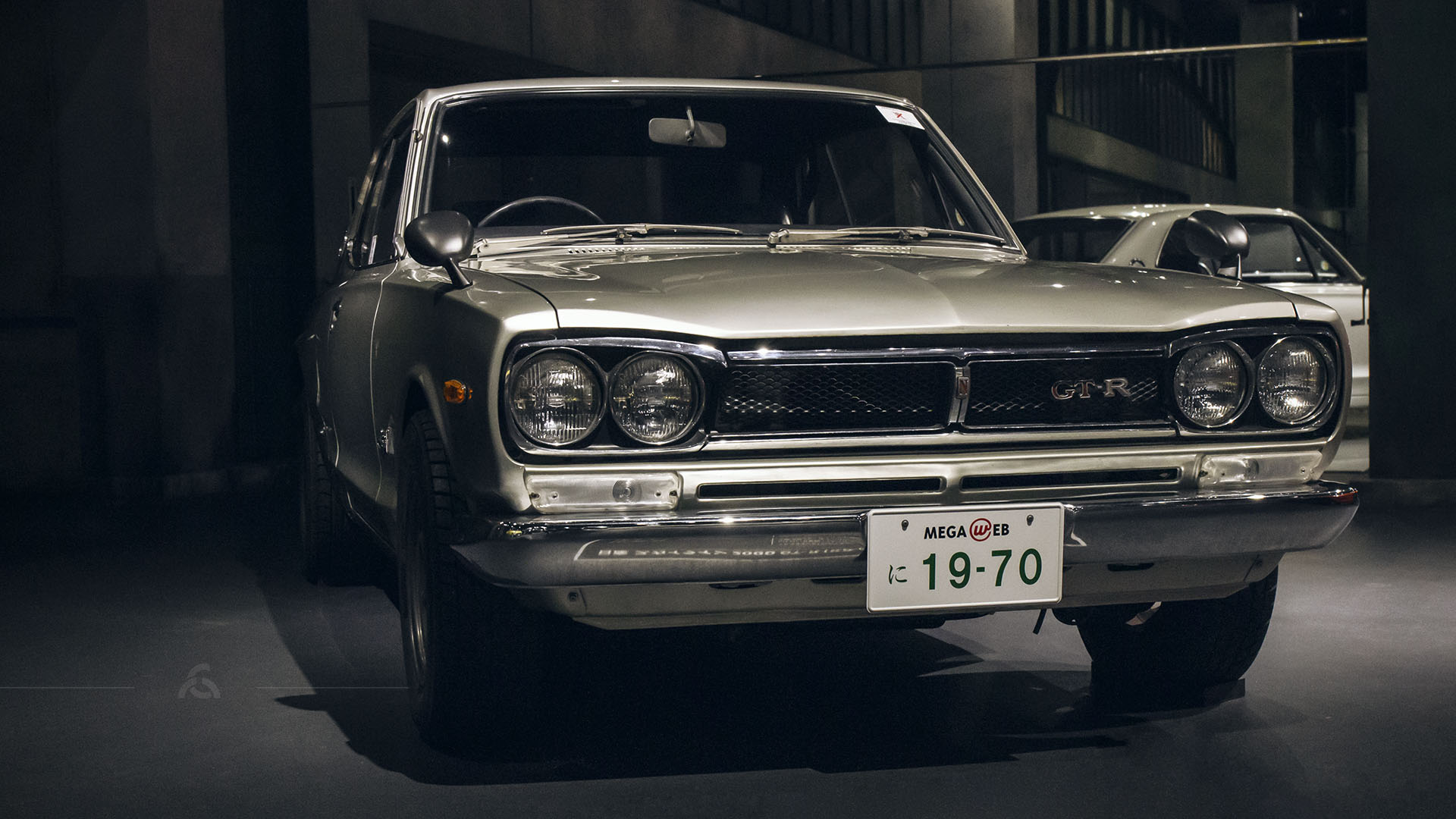 In the heart of the bay of the Japanese capital is the Megaweb Tokyo. It is a theme park hiding in reality a giant showroom built by Toyota. Composed of a Ferris wheel, a test track, simulators, robotic demonstrators and exhibitions. With the presence of a Toyota Supra Castrol TOM’s JGTC, a Nismo 350Z, a Nissan R34, all original and from the local Super GT, or Indy Cars, we can hardly believe our eyes. More than 140 models from the 60’s to today in continuous rotation: the Megaweb is a place of experience and contemplation. And if the showroom side of things frustrates you a bit for the display of old cars, let’s linger on the History Garage, recreating the Tokyo streets of the old days.

Thus we find a 1960 Datsun 1000 Truck Model G222, one of the first utility vehicles of the brand. It will inspire a successful offspring, which is still in the worldwide catalog, under the Nissan NP300 Navara name.

Stored in a box under cover, we discover a 1963 Toyopet Crown RS41. The second generation out of the 18 that were produced. Its origin goes back to 1955, by the will of Toyota to market a vehicle on a large scale to motorize the country again after the war. It will be sold through a dealership called « Toyopet Store » (hence the original name difference). This icon will become a model of the parent range, very popular and prized by cabs and police. Thus far from being rare to cross in full city many of these models.

The best-selling car of the 1960s, the Chevrolet Impala is a coupe based on the Corvette. Chassis and body elements are taken, like the grille. But not the fenders and the lights which will give the characteristics of its new line well identifiable, and its rear face in « V« . This model is the second generation (sport coupé) of a line built between 1957 and 2020. Opposite, a 1959 Cadillac Eldorado. A genuine ultra-luxury convertible, characterized by its oversized vertical fins integrating the rear lights. Its rare « ambulance/break » version was popularized by the movie Ghostbusters, under the name ECTO-1.

Often referred to as the Jaguar E-Type of the land of the rising sun because of their similarity. This 2000 GT is Toyota’s first attempt at the GT sports car category. Bluffing the international press at the time, it left its mark in several ways. First of all, it beat multiple speed records (with a maximum speed of 220 km/h). Then by being raised to the rank of legend by its presence in the 5 opus of James Bond films: You Only Live Twice, released in 1967. The latter appears in a convertible version specially designed for the needs of the film, to facilitate access to Sean Connery and the shooting. The last of the two copies made is present in the reserve of this museum.

Finally, in the middle of the last room, sits a magnificent Nissan Skyline 2000 GTR (Gran Turismo Racing) from 1970. Mythical sports car, whose nicknamed « Hakosuka ». That can be translatable by « Hako » (box) and « Suka » (diminutive of Skyline), because of its design with very square lines. However, it was entered in many championships and was at the top of the rankings for many decades, depending on the generation. Popularized by the drifting scene and the video game (Gran Turismo), its modified variants are as numerous as its weight in the important car culture.

EDIT: Unfortunately, the center closed its doors on December 31st, 2021, in preparation for a restructuring of Palette town where Megaweb was located.

Need more fuel? Look at this article about the Schlumpf Collection.